Sibby is an accomplished, engaging and entertaining speaker and has presented illustrated talks to numerous groups across the region.

Talks last 45-50 minutes followed by questions and discussion and can be booked privately – popular with clubs, societies and associations.

Please get in touch for details.

The 19th-century rise of King Cotton and the spectacular, catastrophic decline and loss.

Manchester became known as Cottonopolis, leading the world in cotton manufacturing. From a small market town to a place covered by a canopy of smoke, pouring from the tall chimneys of steam-powered cotton mills which dominated the skyline. Then becoming the commercial heart of the whole region’s world trade in textiles. 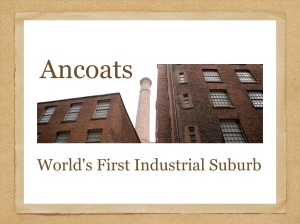 Ancoats is famous across the world for its transformation – from rural landscape to the Industrial Revolution’s steam-powered pioneer industrial suburb, as well as for the workers social deprivation.

The talk explores the development of the area from the 1700s, right up to the regeneration efforts of modern times. It examines the terrible conditions experienced by adults and children working in the cotton mills, their appalling living conditions, the immigrant groups who settled in Ancoats, other industries of the area and the improvement efforts made from Victorian times onwards.

‘The people of Ancoats were creating the wealth of Manchester but were left to live like pigs.’
Dave Haslam Manchester, England (2000)

Angel Meadow and the Irk Valley were infamous in Victorian times – cholera, crime, vice, vermin and death were an everyday occurrence. Huge wealth was created in Manchester during the Industrial Revolution but the steam-powered factory system also resulted in thousands of workers living cheek by jowl in slums and cellars, on next to nothing.

‘Angel Meadow was …the lowest, most filthy, most unhealthy and most wicked locality in Manchester… full of cellars… inhabited by prostitutes, their bullies, thieves, cadgers, vagrants, tramps and in the very worst states of filth & darkness, by those unhappy wretches the low Irish.’